The need for the conservation and protection of global forests is clear and urgent. Indigenous populations like the Amazonian Kichwa have recognized the need for action to prevent the worst effects of climate change, deforestation, and impacts on species. To this end, one Kichwa community is implementing innovative sustainable agroforestry practices in the Ecuadorian Amazon.

An indigenous population of approximately 55,000, the Kichwa live in the Ecuadorian rainforest that spreads from the Andean foothills to the Amazonian lowlands. They are all too aware of the threats to their livelihoods and territory, an area that covers more than 1 million hectares (2.5 million acres) that was secured following the 1992 protest in Pastaza where they demanded their land rights.

The primary threats are the same as elsewhere in the Amazon: forest fires, the introduction of cattle and roads, slash-and-burn agriculture for monoculture, like palm oil, the encroachment of human settlements, as well as illegal logging, mining, and oil and gas extraction.

In the face of these threats, a group of Kichwa smallholder farmers in the so-called 24 de Mayo community near the town of Loreto, in the province of Orellana, have organized.

They are implementing innovative approaches to forest conservation on their community’s 6,000 hectares (14,800 acres) through the indigenous-owned business Ally Guayusa and a unique set of partnerships.

“We are a farmer-owned cooperative accountable to the community to produce, harvest, process, and sell organic guayusa [Ilex guayusa] tea for local and international markets,” said Leonor Andy, the general manager of Ally Guayusa. 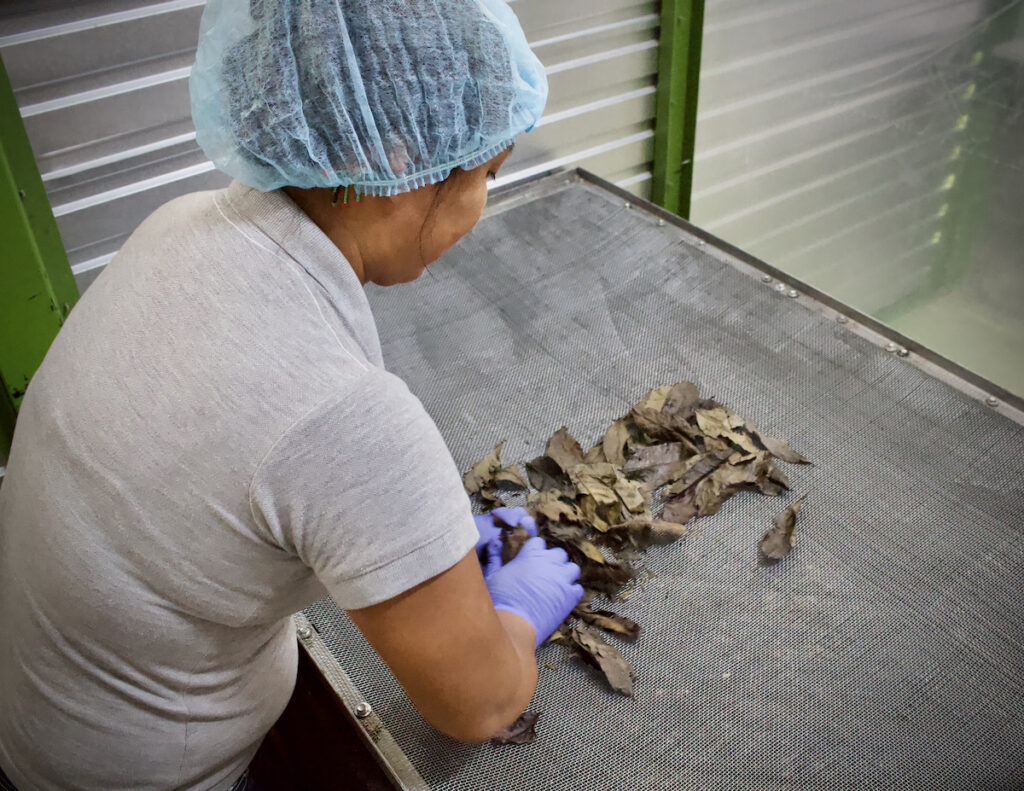 Ally Guayusa recently established an innovative partnership with the Aliados Foundation and Lush Cosmetics Charity Pot to protect the Amazon and Kichwa livelihoods by diversifying sources of income from forest products while at the same time protecting the land on which the Kichwa depend.

Guayusa is an important cash crop central to their efforts.

Organic guayusa tea, a relative of yerba mate, plays an important role in Kichwa culture and, increasingly, in their forest conservation efforts.

“It has been used for generations by Kichwa communities,” Andy said. “Traditionally, it’s harvested directly from the forest and then boiled into a tea. It’s then consumed in the early morning before the sun comes up while sharing dreams and planning for the day.”

Guayusa, a wild species of holly tree that grows at elevations between 200 and 2,000 meters (660 and 6,600 feet), is also planted and cultivated by the Kichwa in traditional smallholder agroforestry farming systems. Ally Guayusa brings 103 of 250 families in the community together to turn their harvest of guayusa into loose-leaf tea and then sells it in local and global markets. 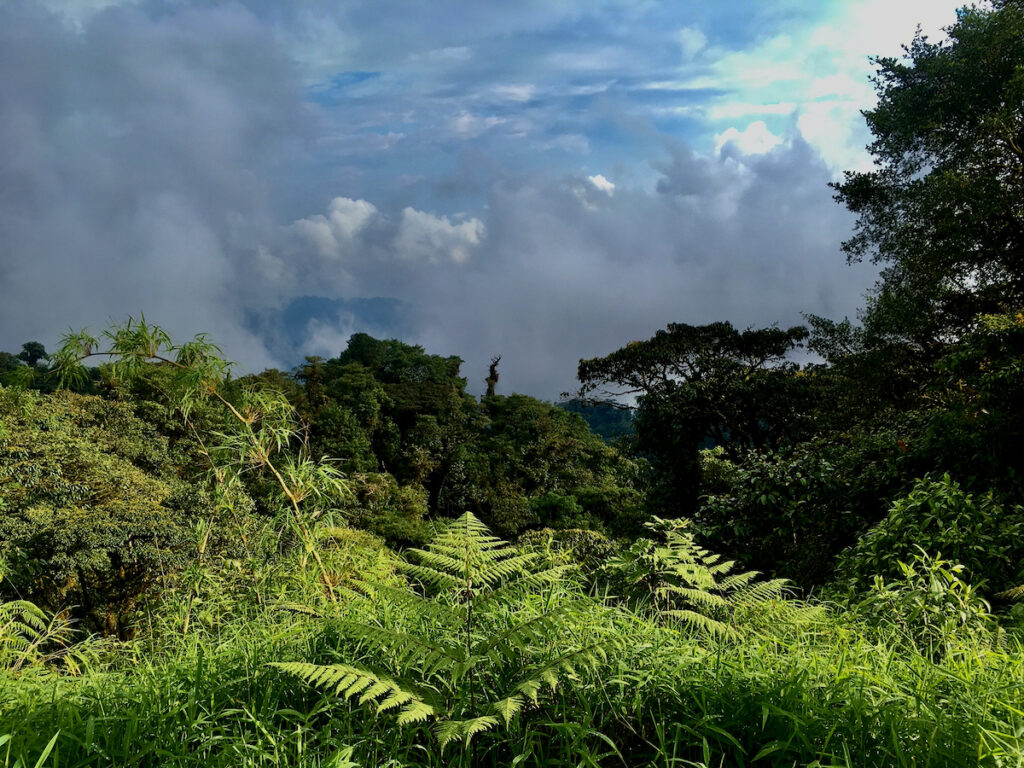 “These communities need access to cash to supplement their traditional lifestyles and to serve as a safety net during hard times,” said Wain Collen, executive director of Aliados Foundation and a 2014 Kinship Conservation Fellow. “They could get cash by logging their forest and planting non-native crops [e.g. palm oil] but that would undermine the health of the ecosystem, their home.

“Instead we are working with them to cultivate native cash crops that are produced without degrading the forest thereby conserving biodiversity and habitat for animals too,” Collen said.

The Kichwa have traditionally practiced agroforestry in smallholder plots known as chakras, and these efforts build upon that experience.

Ally Guayusa has 40 hectares (99 acres) of rainforest where it cultivates certified organic guayusa. It also works with Aliados to experiment with new crops to successfully integrate timber species, fruit trees, Amazonian cinnamon and lemongrass alongside guayusa trees. The goal is to contribute to the health of the forest, while also providing a source of income, according to Collen.

With a donation of land from the 24 de Mayo community, a grant from Lush Cosmetics, and a zero-interest loan from Fundación Crisfe, the Kichwa now have the capacity to produce up to 1,600 kilograms (3,500 pounds) of guayusa tea per month, according to Andy. This can generate up to $150,000 per year, 40% of which goes to the family farmers for payment for the tea that they harvest; the remainder is dedicated to operating and managing the cooperative, Collen said.

Guayusa tree leaves use to make the tea. Image by Matthew Wilburn King.

Lush Cosmetics, in its efforts to fund indigenous communities and environmental protection, has been an important source of funds for Ally Guayusa.

The combination of resources has increased the Kichwa’s capacity to cultivate much-needed cash crops, like guayusa, thereby increasing income and the regenerative capacity of the land.

In conversation with cooperative members it was clear that these efforts are giving them hope. According to one farmer, Ricardo Huatatoca, selling guayusa has helped to provide the means to support his family and pay for his children’s education.

“If we have a little bit of everything, coffee, rice, chocolate, chickens and guayusa, then we can survive and not depend on only one product,” he said. 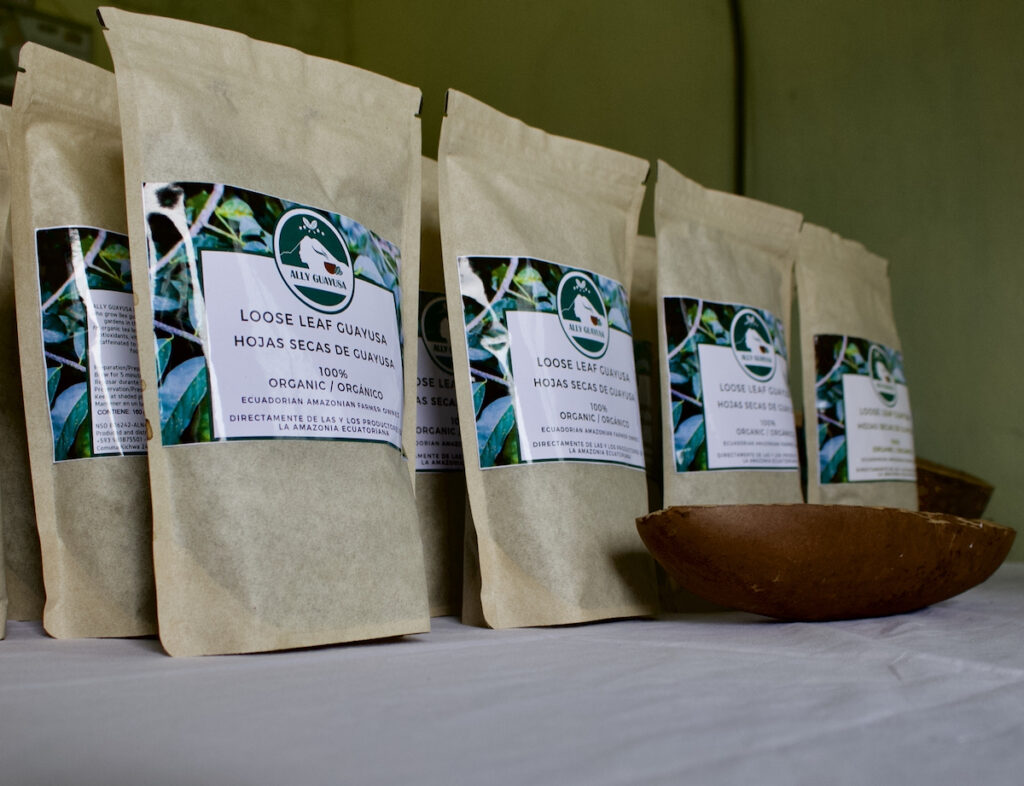 Another member of the cooperative, Nelson Grefa, said that guayusa “can lift us out of poverty, it can give our children a path to more businesses in the future.” He added there is an important positive environmental impact: “The plant produces leaves all year round and does not require much care. No trees are cut down for this plant, only the leaves are harvested and the forest remains intact.”

The combination of market-based approaches to conservation, coupled with traditional agroforestry practices, not only protects Kichwa culture, livelihoods and the ecological system upon which they depend — it has the added benefit of mitigating climate change by keeping forests intact so that they can continue to sequester carbon dioxide.

In addition to the environmental and financial benefits, the Kichwa’s approach also makes it possible for them to continue living and working on their native land. Their continued presence throughout the Kichwa territory “may provide an additional layer of protection for the 24 de Mayo community’s 6,000 hectares, particularly when it comes to illegal loggers, miners and poachers,” Collen said.