In 2008, after spending 23 years serving the World Bank as the lead information technology specialist, Rob Schware was headed to prison. It wasn’t just any prison; it was San Quentin State Prison, notorious for housing some of the most violent criminals in America. 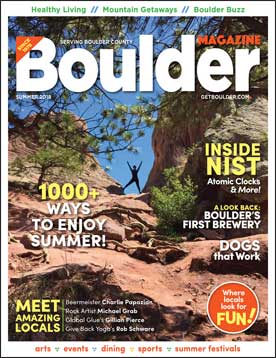 The Boulder resident didn’t know what to expect when he first entered San Quentin. “The most memorable moment was when the gates closed; I went through the first and second checks, when those final gates closed and I heard the clang, I realized: whoa, I’m here, I’m in prison.”

The experience was sobering, he says. “I felt super conscious of being in a very foreign land . . . even after having been to loads of developing countries for the World Bank; living and working in violent places like Rwanda for two to three years.”

So what brought him to prison? Yoga. But it’s a long story.

Schware started practicing yoga for his health, after he pulled his back lifting his son out of a tree swing. His first class was an Ashtanga trial class in 1996 at the Omega Institute of Holistic Studies in New York, which is where he first met Beryl Bender Birch.

After realizing yoga’s benefits, Schware began a 300-hour Ashtanga Yoga teacher-training program with Birch. One day he had a eureka moment: he realized that he wouldn’t be a great yoga teacher. “I spent the rest of the day in a stew, [thinking] what am I good at that could serve the yoga world?”

Schware called his teacher and asked: “How can I serve the yoga teachers who have done so much for me?”

As part of her 500-hour teacher training for the yoga institute, Birch required students to complete a “give back” project—which included writing it up, implementing it and reporting back to the class. As the two of them spoke, they came to the conclusion that his “give back” idea could be a nonprofit organization to serve the yoga community more broadly. Schware could find freedom from being burned out after a long career and use his experiences with the World Bank to serve the yoga community.

Together they created the Give Back Yoga Foundation (GBYF), a national nonprofit yoga organization that helps certified teachers share yoga therapy with underserved populations.

This is where the story comes full circle. He was invited to San Quentin by James Fox, founder and executive director of the Prison Yoga Project, who has been teaching yoga to prisoners since 2010. The project gives men and women behind bars a chance to heal and transform through yoga. Schware delivered the first printed edition of Yoga, A Path for Healing and Recovery to Fox. It was the second project funded by the GBYF since it was founded in 2006.

In addition to teaching with and supporting Fox’s mission at San Quentin, GBYF has distributed more than 22,000 copies of Yoga, A Path for Healing and Recovery to prisoners free of charge. GBYF has also expanded its outreach to other underserved communities through four additional programs: Yoga of 12-Step Recovery, Eat Breathe Thrive, Yoga4Cancer and Mindful Yoga Therapy.

While Yoga of 12-Step Recovery is designed to support addiction recovery and relapse prevention through yoga, Eat Breathe Thrive offers a system of support for anyone struggling with a negative body image and eating disorders. Yoga4Cancer integrates yoga into cancer treatment plans to assist with managing the side effects of treatment, boosting immunity and improving recovery. Mindful Yoga Therapy, also known as Yoga for Veterans, helps returning warriors find calm in both body and mind, particularly those suffering post-traumatic stress disorder (PTSD). This latter program is based on a clinically proven protocol that is in use at 48 Veterans Affairs (VA) facilities nationwide.
After years of experience, Give Back Yoga is now introducing its protocols and resources into a variety of social agencies—VA hospitals, detention, re-entry or rehabilitation facilities, and addiction treatment centers.

Working in prisons, says Schware, “always reminds me we’re all shaped by the impact of unresolved trauma and conditioned responses to such trauma.” For this reason, GBYF has developed programs that focus on varying types of trauma with the goal of using yoga as a means to heal.

Although Schware continues to practice yoga, as the executive director of GBYF he draws on his previous experiences with the World Bank to support and promote the efforts of GBYF’s program by raising funds, developing strategic partnerships and focusing on education and outreach. Now, Schware wakes up each morning and asks himself: how may I serve the greater yoga community? “The day kind of takes a course of clarity after this moment,” he says.