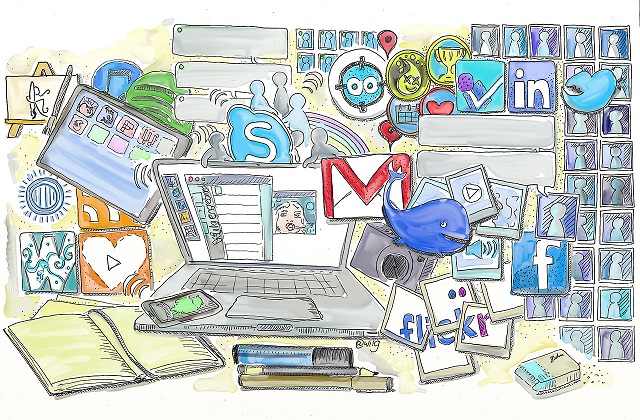 Specifically, they use self-relevant information that promotes our naturalnarcissistic tendencies. They know we have a strong need to be seen, to feel connected, and to belong, so they exploit this fact to keep us coming back.

Humans have specific psychological traits and cognitive biases that lead to vulnerabilities in people that are easily exploited by social media networks to get you addicted to their platforms. Sean Parker, an early investor in Facebook, called the social media giant a “social-validation feedback loop.” Parker said, “It’s built to exploit human vulnerability.”

What traits in a person are most likely to lead to social media addiction?

So, how can we tell if someone is addicted to social media?

When they’re not tracking and “liking” what everyone else in their social circle is posting, they feel guilty—and sometimes, they may even feel anxiety. They are most often the people who can’t stand being alone, do not like silence, or are uncomfortable if they aren’t doing something—anything—to fill the empty space. It’s most often because they lack self-control.

How does social media addiction work, and what are these vulnerabilities that are exploited? Here’s what Scientific American has to say about it:

“Humans have a fundamental need to belong and a fundamental desire for social status. As a result, our brains treat information about ourselves like a reward. Social networking sites grab us, because they involve self-relevant information and bear on our social status and reputation. The greater your need to belong and to be popular, and the stronger your brain’s reward centers respond to your reputation being enhanced, the more irresistible is a social media site’s siren song.”

What can we do about it when we’re trying to connect with a friend who can’t get away from the their device, or the siren song of social media?

Personally, when I’m in a social situation where my friends, colleagues, or acquaintances are on their devices over being present in the room, I get up and leave. If it’s a one-to-one interaction, I simply tell them that my desire was to meet and connect, but that I don’t feel like I can when they’re continuously on their device. Some of my friends appreciate my honesty for that reason.

Obviously, when I get up and leave the group, it’s a form of social rejection. If you have a strong need to please people, this may not be the best strategy for you. Fortunately, I don’t have the people-pleaser gene. I value my time and my presence too much to let it be wasted because others struggle with their own self-control. And, I have no desire to control them; that’s way too much work.

My philosophy is that there are 7.3 billion people on the planet. The odds are pretty high that I can find at least two to three people out of everyone in the world who wants to connect in a real way. However, I’ll never find them if I’m trapped hanging out with social media addicts. So, I let the addicts go.

Later, a friend might ask: Why’d you ghost us? Or: Where did you go?

I simply say: People were on their phones, and no one felt present, so I left.

I tell them that I joined them because I genuinely wanted to connect, but I couldn’t, so I went home. Sometimes the simplest truths in these scenarios prove most effective.

In that moment, most friends realize that they too want to connect; that’s the reason they’re addicted to social media in the first place. They have a deep desire to connect, but they’re so conditioned to be on their device that they don’t even notice in those moments when they have a chance to connect.

Ultimately, they fail to get what they actually want out of human interaction, which also gives you an indication of how effective social media companies are at exploiting cognitive biases.

How can you tell the difference between someone who is addicted—in desperate need of belonging or being popular—and someone who isn’t?

One or two thoughtful posts a day or each week isn’t the issue; it’s the people who post continuously each day. They post a half-dozen, or a dozen posts, or more continuously in hope that they get another “like” or another comment.

Here’s a great video on “How Much Social Media is Too Much” produced by Common Sense Media.

At the same time, they’re continuously liking and commenting on others’ posts to feel connected, which is never actually attained, leading them to do it more and more. This is the feedback loop Mr. Parker referenced.

How can you tell if your friends are in need of connection—or have a strong need to belong or to be popular? Check out a friend’s personal profile and the number of times they post on Facebook or Instagram each day, and you’ll know which of them could use a call or an invitation to connect in person.

A more personal touch can occur on social media when we write someone a private message that thoughtfully acknowledges something they posted about or that they have accomplished. Tell them how it made you feel. This action can start an actual dialogue and help with bonding.

Since messages are private and not visible on the platform, it can lead to more authentic communication about different topics or ideas, while diminishing the likelihood of social media posturing that’s often driven by conformity biases or the herd mentality. Here’s a one minute video that explains conformity bias.

The more one posts, the more lonely they’re likely to be—so reach out and ask your friend to do something creative with you. Or, if you believe you’re the one feeling this way, do something creative for yourself. You don’t always have to fill the space, but if you do: write, paint, exercise, volunteer. Do anything that allows you to connect with yourself or other people while you’re there in person.

In short, incessant posting is the equivalent of a big red flag waving that says: Please, help me. I feel lonely. So, reach out, and ask your friend if they’d like to get a cup of coffee or go on a walk. Everyone wants to belong—we’re human. The goal is to avoid the herd and the cliff.