Thanks to Operation Rudolph, some of Tulsa’s neediest children are going to have a holiday that shines as brightly as the red nose of Santa’s favorite reindeer.

Kappa Sigma Fraternity at the University of Tulsa and the Tulsa Action Group will sponsor the sixth annual toy giveaway that makes Christmas happier for area children. This year’s party and toy giveaway will be held Dec. 11 at TU’s Great Hall in the Allen Chapman Activity Center.

Entertainment by the Oklahoma Kids, Fergie Bear, Santa, Rudolph and a visit from TU coaches and players are scheduled.

Olympic gymnast Shannon Miller hopes to be able to attend, as well as many local, state, county and nationally elected officials and dignitaries.

A special presentation will recognize Clint Walden, who founded the program in 1988. His hard work over the years has helped make the project one of the biggest events of its kind in northeastern Oklahoma.

Reports show that last year more than 1,600 children were helped. That puts a smile on the faces of all those who participated.

Among those helping are Matt Wilburn, chairman; Louise Manes, co-chairman; and Harvey Hudson. 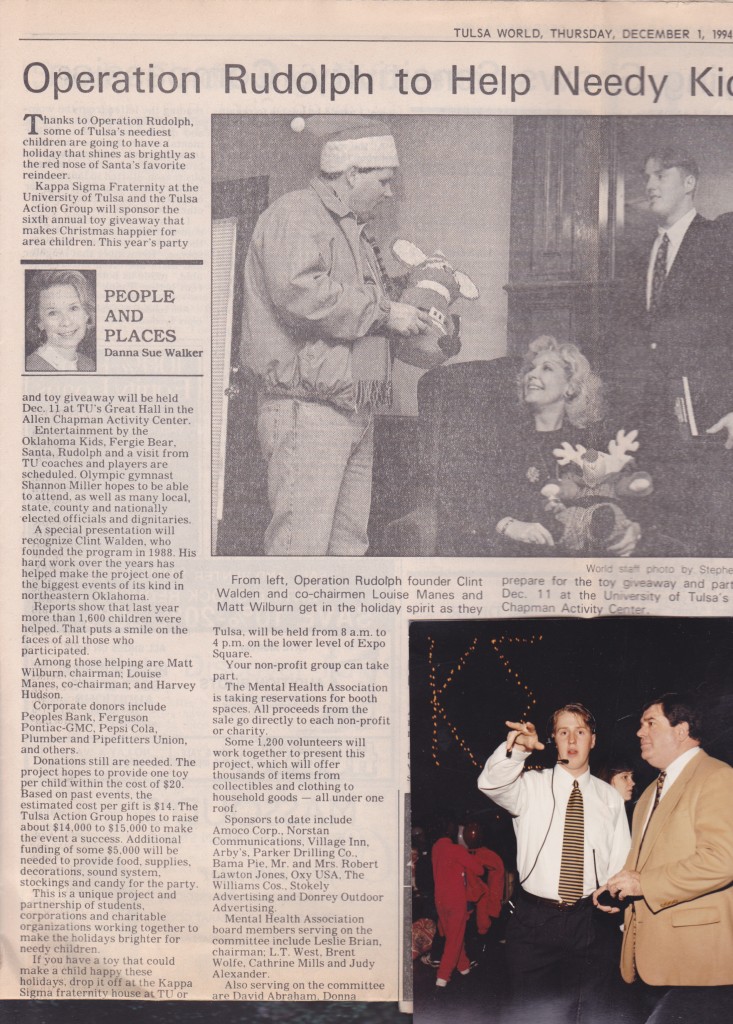 Donations still are needed. The project hopes to provide one toy per child within the cost of $20. Based on past events, the estimated cost per gift is $14. The Tulsa Action Group hopes to raise about $14,000 to $15,000 to make the event a success.

Additional funding of some $5,000 will be needed to provide food,  supplies, decorations, sound system, stockings and candy for the party.

This is a unique project and partnership of students, corporations and charitable organizations working together to make the holidays brighter for needy children.

Read more from this Tulsa World article at http://www.tulsaworld.com/news/article.aspx?articleID=485225